An event every month that begins at 7:00 pm on day Fourth of the month, repeating indefinitely 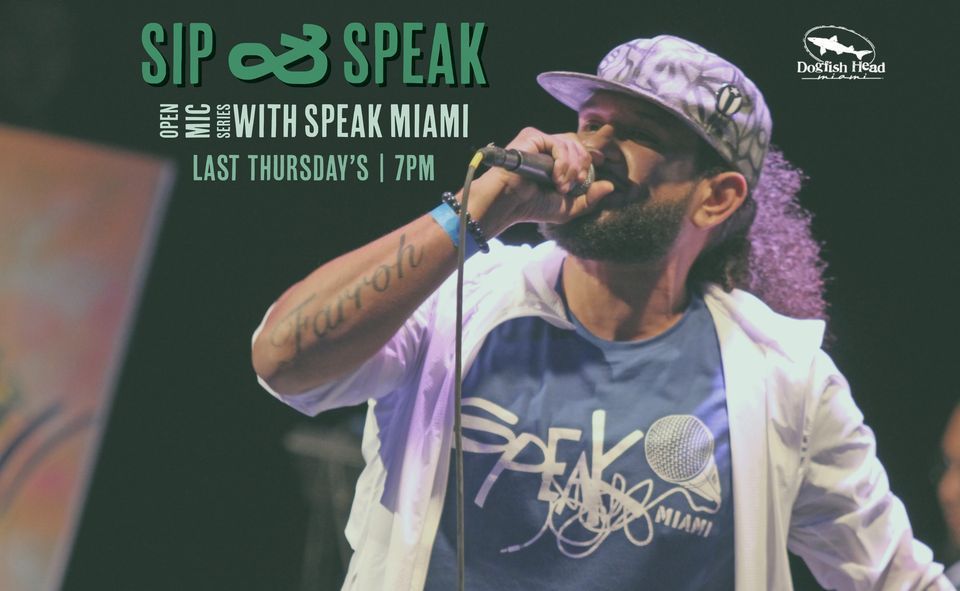 Dogfish Head Miami, Wynwood’s off-centered craft brewery, is partnering with Speak Miami to bring together beer lovers and Miami’s best up-and-coming artists, poets and musicians on the last Thursday of every month, starting at 7 p.m.

The brewery has served as a hub for one-of-a-kind, multi-sensory experiences since their opening last year, giving locals and visitors alike a place to gather and enjoy innovative beers and local food alongside music and art. Monthly Sip & Speak: Open Mic Night will give locals another opportunity not only to enjoy beer, music and art in various forms, but also to share their art as well. For those interested in performing, sign up begins at 6:30 p.m. on each Sip & Speak: Open Mic Night.

About Dogfish Head
Dogfish Head has proudly focused on brewing beers with culinary ingredients outside the Reinheitsgebot since the day it opened as the smallest American craft brewery nearly 25 years ago. Dogfish Head has grown into a top-20 craft brewery and won numerous awards throughout the years, including Wine Enthusiast’s 2015 Brewery of the Year and the James Beard Foundation Award for 2017 Outstanding Wine, Spirits, or Beer Professional. A Delaware-based brand with Dogfish Head Brewings & Eats, an off-centered brewpub and distillery, Chesapeake & Maine, a seafood and cocktail spot, Dogfish Inn, a beer-themed inn on the harbor, and Dogfish Head Craft Brewery, a production brewery and distillery featuring the Tasting Room & Kitchen and Dogfish Head Distilling Co., Dogfish Head is a supporter of the Independent Craft Brewing Seal, the definitive icon for American craft breweries to identify themselves to be independently-owned and carry the torch of transparency, brewing innovation and the freedom of choice originally forged by brewing community pioneers. Dogfish Head currently sells beer in all 50 states and Washington D.C. For more information, visit www.dogfish.com, Facebook: @dogfishheadbeer, Twitter: @dogfishbeer, and Instagram: @dogfishhead.