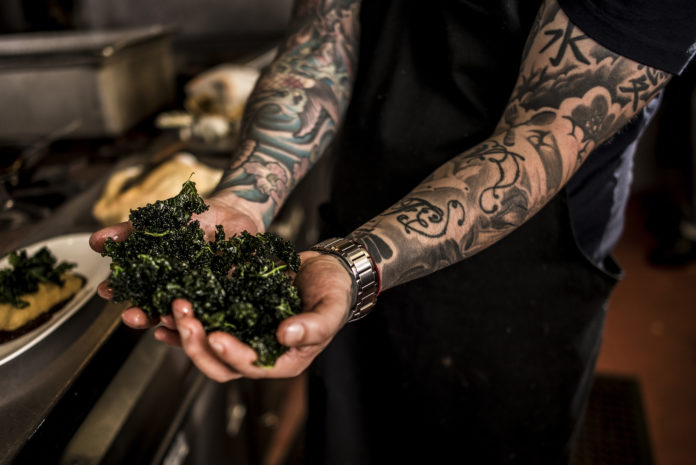 When Pablo Salas opened Amaranta, now a destination restaurant in Toluca, Mexico, seven years ago, he admits, “I didn’t know what I was doing. That’s the truth.”

While he may not have considered himself ready, Salas had received classical training from a well-regarded culinary school in Mexico City. It’s the type of training—picture white paper hats, French technique and artsy plates—that one undergoes to eventually land a spot in one of the cutting-edge kitchens of Spain or France.

But in between his graduation and when he opened Amaranta, Salas realized he was missing something; he now had the skills to produce the elevated plates of fine dining, but he didn’t feel the cuisines he would now be expected to produce. “I thought, ‘Why should I do other kinds of cuisine if I don’t even know it? Like, how am I going to do French cuisine if I’ve never been to Paris?’”

To remedy that division within, he spent the year before opening Amaranta immersing himself in what he refers to as “cocina Mexiquense,” or cuisine from the state of Mexico. He dedicated himself to visiting local markets, learning techniques and reading books about his home state’s cuisine, which is considered homey and humble with its deep, rich sauces and off-cuts of meat.

“I started doing research and realized that every state in Mexico has its own gastronomy,” the 37-year-old says. “So, I decided to do my own thing with ingredients that I know from my own background.”

That decision marked a seminal moment in his career. With his eclectic and elevated take on traditional Mexican food, Salas quickly gained recognition from locals and critics alike. Since 2014, Amaranta has been featured in every edition of the Latin America’s 50 Best Restaurants list, peaking as high as No. 15 in 2016.

The success of Amaranta allowed him to take on new projects, including a fast-casual restaurant called Publico Comedor in Mexico City, and Chicago’s Pueblo, which offers a contemporary take on Mexican home cooking.

Since December, Salas’ cocina Mexiquense has infiltrated Fort Lauderdale at his lunch-and-dinner hot spot Lona and its sister eatery Tinta, which provides breakfast service. (Both restaurants are located at The Westin Fort Lauderdale Beach Resort.) Perched steps from the water, Lona, which translates to “canvas,” is an open and polished space, allowing the ocean breeze to blow through the indoor-outdoor bar and into the dining room. Decorated in a contemporary Southwestern motif, the restaurant leads you to believe you’ve been transported from South Florida to Santa Fe. And while you won’t mind being swept away for the night, Salas is just as happy to have been brought to the Sunshine State by the restaurant’s management team.

“To be honest, I didn’t choose Fort Lauderdale; I think Fort Lauderdale chose me,” he says. “I’m really thankful. I think it’s a great spot to show my culture and what we’re doing in Mexico.”

It won’t be long before the feeling of gratitude becomes mutual. Simply put—if you’re talking about Mexican food in South Florida—it’ll be hard to find another chef who matches Salas in terms of authenticity, quality and originality. During the last few years, Salas has refined his cooking philosophy and technique, gradually moving away from molecular gastronomy (which put him on the map at Amaranta) and instead placing a premium on simplicity. Don’t be fooled, though—simple isn’t always synonymous with easy.

“Since I opened Amaranta, I think I’ve been growing up,” Salas says. “I think I cook a lot better today. Right now, the main thing is the ingredient. Don’t ruin it. Don’t put a lot of things on the plate. Let the ingredients shine.”

At Lona, this maxim is on full display. Plates are minimalist in their presentation and construction. Furthermore, ingredients that might play a bit role elsewhere are given the spotlight. Take the humble chili pepper, for example. Often thought of as an ingredient whose value can be strictly measured in Scoville units, it becomes so much more in Salas’ kitchen. Of course, it can be used as a cheap anesthetic, but it can also be used to provide delicate layers of flavor, a recurring theme in the dishes at Lona.

In his pasilla sauce, the chili shines in all its complexity. There’s a pleasant burn, sure, but through his alchemy, he conjures flavors of smoke, espresso and cocoa bean. Never heard of pasilla sauce? Salas is OK with that.

“I think Americans right now are really open to these ingredients, to new styles of Mexican cuisine that isn’t just burritos,” he says.

That’s not to say you won’t find expected items like enchiladas, guacamole and fajitas on the menu, but the inventive tweaks he adds to each won’t disappoint. With your meal resting in the hands of someone as talented as Salas, though, you’d be wise to order some items you may normally gloss over.

Case in point: Salas’ cabbage al fuego. The cabbage is salted and peppered, wrapped in foil and then cooked over charcoal until it is so tender it can be cut with a fork. It is then placed over pipian sauce—a type of mole that is peppery, earthy and nutty—and a cauliflower puree. The dish is finished with cotija cheese, cream and truffle oil. Each bite of the cabbage, with its texture of roasted artichoke, reveals new layers of intricate flavor; it is an eye-opening dish, and one that encapsulates Salas’ philosophy of keeping things simple and letting the ingredients shine.

If you must have tacos, though, opt for the pork carnitas. The pork is cooked confit-style, rendering it succulent and filled with a rich, fatty flavor. To cut through the heaviness of the pork, Salas employs a tangy salsa verde and garnishes the dish with chunks of pineapple, red onion and cilantro, serving it with corn tortillas.

“I want people to try real Mexican food that feels and smells like Mexico,” Salas says.

At Lona, it will be hard for diners to walk away without feeling that they’ve missed out on something all this time, and that the de rigueur chips and bland salsa just won’t cut it anymore. It is this ability to transform both the humble ingredients of his food and the perspectives of his patrons, Mexican and American alike, that will keep opening doors for Salas in the years to come.