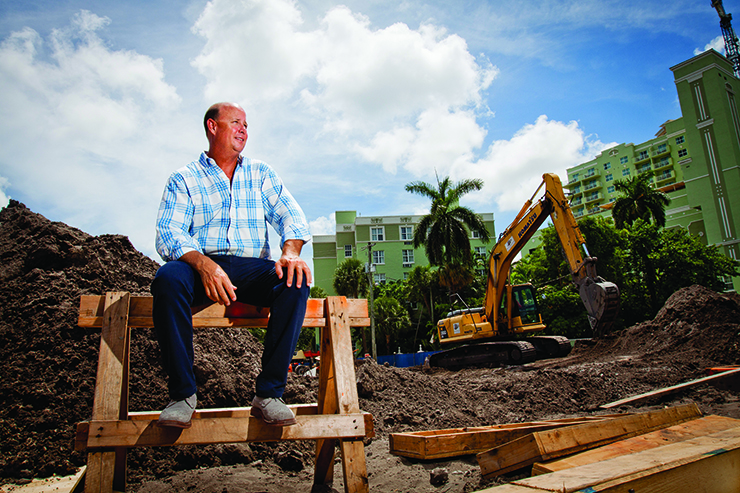 Driving through Fort Lauderdale, one sees familiar sights: Coconuts restaurant, Broward Health hospitals, the Museum of Discovery and Science, Boatyard restaurant. Not only are they all embedded into the city’s landscape, they’re all projects that builder Grey Marker has had a hand in over the years.

Marker is the principal of the Marker Construction Group, carrying on a family tradition of building construction that began in Philadelphia. In 1978, when he was in the fourth grade, the family moved to Fort Lauderdale. In 2001, with enough roots planted in the area, Marker started his company.

“My biggest mission is to be a big part of revitalizing and connecting the east side of Las Olas to the west side and having it be one large, kind of walkable main street of Fort Lauderdale,” Marker says.

In fact, the Marker Construction Group is already getting started with this vision by building a two-story office and retail space on Las Olas. Located at the southwest corner of East Las Olas Boulevard and Southwest Eighth Avenue, the site is adjacent to the Riverside Hotel. Set for completion in summer 2017, it will feature 31,000 square feet of space along the New River. The 2-acre plot of land, which has been unoccupied for nearly five years, is quickly becoming one of the most anticipated spaces in the commercial district. 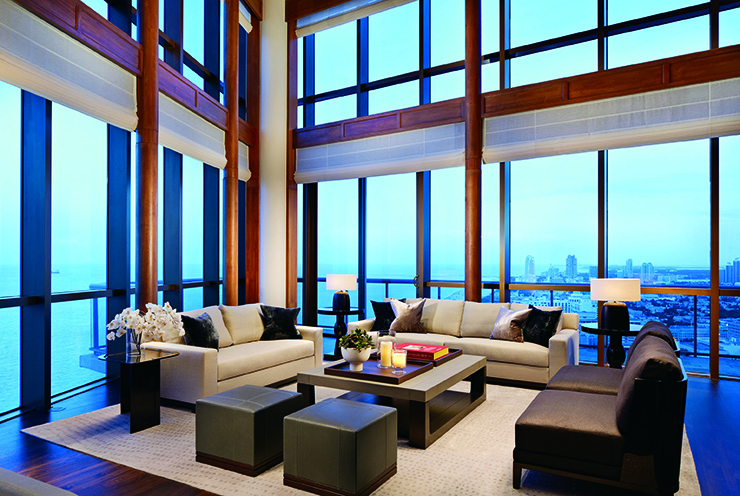 To better understand Marker’s work, it’s best to flash back to his first projects, which included a residence for Paul Flanigan, the owner of Quarterdeck restaurants. However, the real turn came for Marker Construction Group when it was hired by Pavlik Design Team, an international design firm, for Marker’s first commercial project, the Victoriana office building on Broward Boulevard that was completed in 2005.

“The job was a tremendous success because it came in on time and under budget,” Marker says. “From that project, our business just took off, elevating us to one of the top 25 builders in South Florida.”

Fifteen years later, the company has taken on major projects in retail, residential and offices, and won nine Construction Association of South Florida awards for craftsmanship in 2015. “Anyone can put shiny marble on the floor of an office building, but we also look at how it’s assembled behind the scenes, how the process is for the client, and whether the work is done in an organized, professional manner that saves the client money in the end,” Marker says.

A memorable project for him was renovating the Humane Society of Broward County’s building on Griffin Road. A volunteer and donor, he was especially interested in helping the animal advocacy group when its building was in disrepair after decades of use. 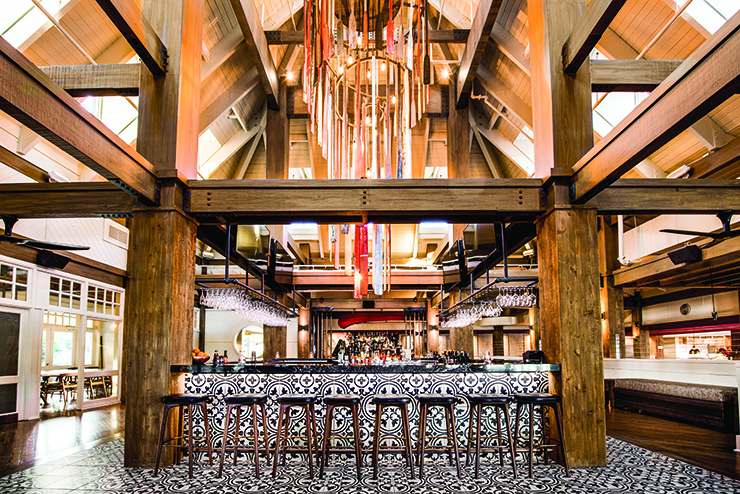 “I wanted to make sure that we were involved in the growth of making the Humane Society a better place,” Marker says. “It was a great building, but they had grown so much that the building was over-utilized.”

The project was complicated, as the nonprofit could not stop its work for the renovations. So, the Marker Construction Group and other teams involved had to work together to make the space usable as construction went on. After all, “they can’t stop adopting dogs,” Marker says.

From 2012 to 2014, Humane Society of Broward County’s building underwent a seven-phase face-lift, which included cosmetic enhancement on the interior and exterior. As Anthony Priore, the Humane Society’s senior vice president, says about the building prior to the new construction, it looked “very institutional” and did not reflect the nonprofit’s future path. “When the building was built in 1993, it was considered state of the art at the time with all the necessary functionalities for that era,” Priore says. “Through the years, we more than doubled in staff, from 45 to 100, and the building had to be renovated and somewhat reconfigured to meet the needs of the staff and customers.” 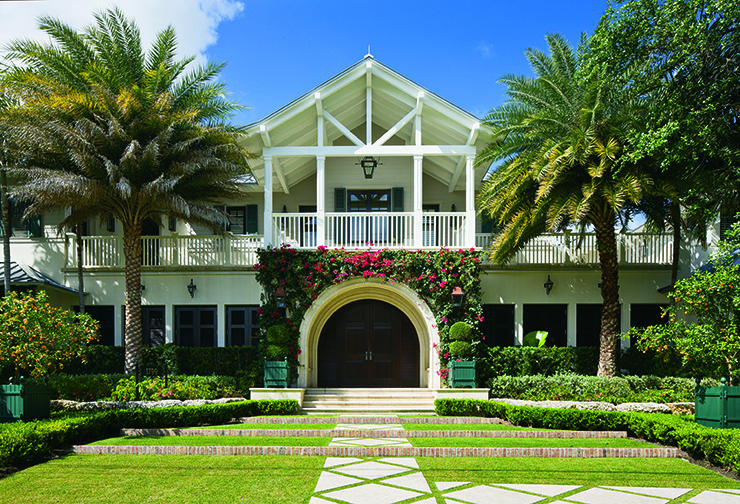 Along with architecture firm Garcia Stromberg and interior design company Leo A Daly, the Marker Construction Group gave the existing building an airy look, which was accomplished by raising part of the roof and adding windows throughout, allowing more natural light into the public areas.

“The change in appearance of the building has dramatically changed the perception of us with our customers, potential customers and our corporate sponsors,” Priore says. “They are very proud to partner with us. Our corporate sponsors, such as Purina and VCA, are completely taken aback by our building, noting that it doesn’t look like a typical adoption facility, but instead a warm and inviting place.”

But Marker’s company goes beyond rebar and cement. At home, he has a collection of more than 500 architectural books and admires the Old Florida style of architecture, and is inspired by the Schlesinger Law Offices on Davie Boulevard and The Breakers Hotel in Palm Beach.

With his expertise in construction and belief in the importance of architecture, Marker’s goal is to see Fort Lauderdale grow even more, especially on Las Olas Boulevard. He wants the city to follow in the footpaths of Miami Beach’s Lincoln Road or Palm Beach’s Worth Avenue.

“They’ve all done these big streets, and we have not done that yet,” he says. And as Marker points out, if the company’s mantra of “build better” is any indication, he’ll be ready for it when the time comes. 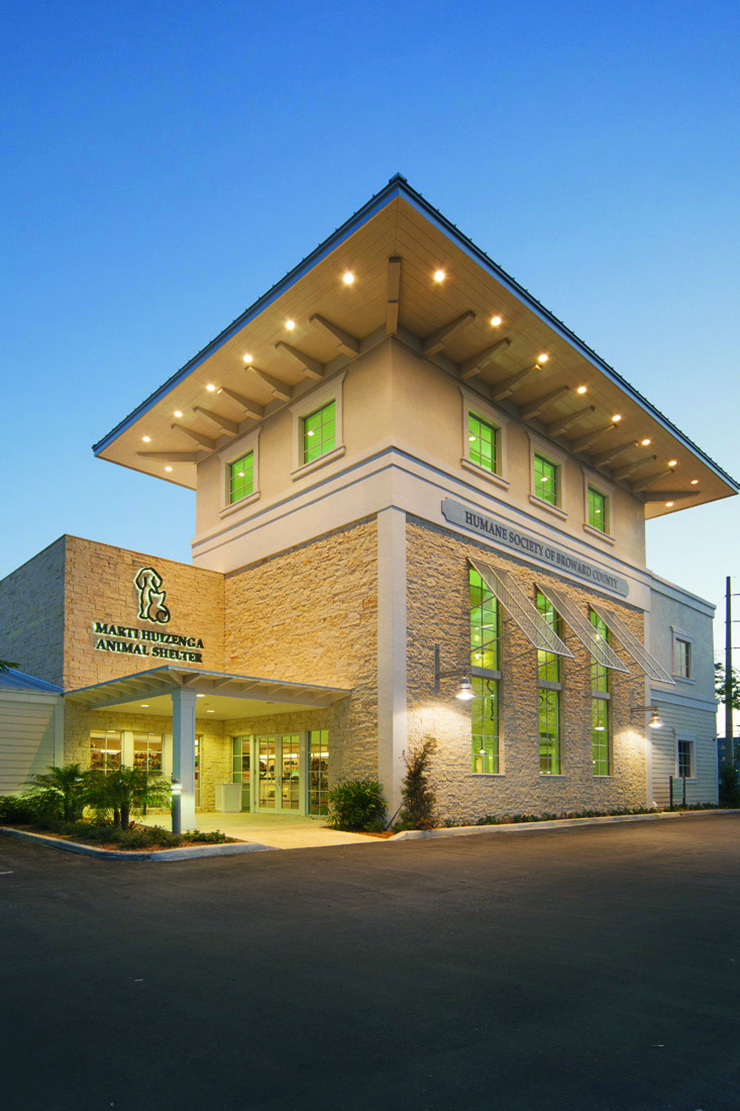 STRUCTURALLY SOUND: Marker Construction Group’s projects have dotted South Florida’s neighborhoods over the years, varying from commercial buildings to residential. The company has also worked with nonprofits, including the Humane Society of Broward County’s building.