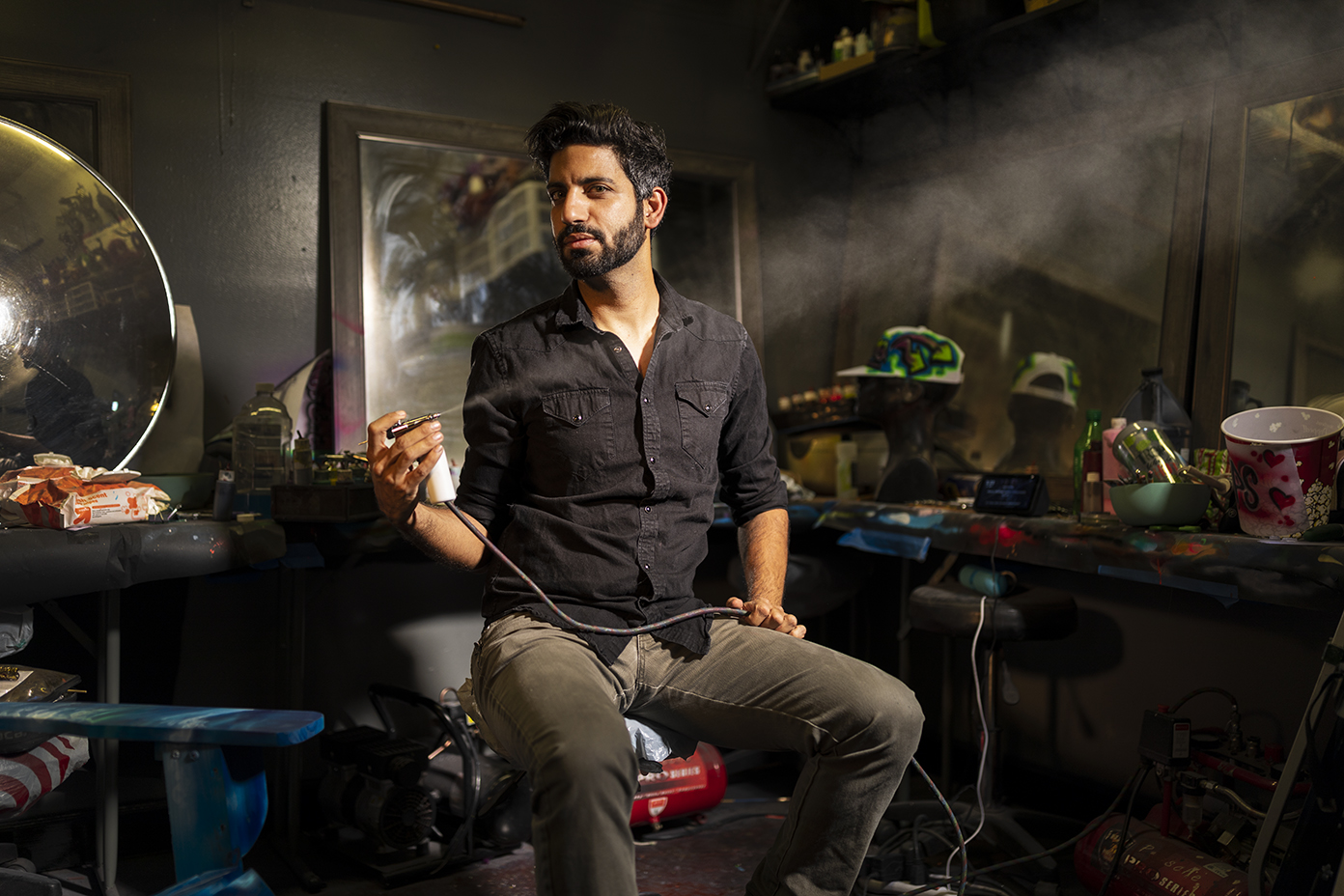 When the ancient Egyptians painted themselves in hopes of warding away evil and honoring the supreme goddess Hathor, little did they know the impact the art form would have on the world today. In 2005, Sports Illustrated’s annual Swimsuit Issue featured models wearing designer swimwear made entirely of body paint. A few years earlier, model and actress Rebecca Romijn embarked on her first major acting role as Mystique, the shape-shifting villain in the “X-Men” film series, gaining massive media attention due in part to the deep-blue costume comprised of nothing but body paint and prosthetics.

Beginning in 2014, the art form’s popularity gave way to three seasons’ worth of a reality TV competition called “Skin Wars” on the Game Show Network, pitting aspiring body paint artists against one another in creative weekly challenges. The show, hosted by Romijn, saw artists present their work to the judges. At the end of each episode, Romijn would dismiss the eliminated artist with the phrase, “It’s time to wash off your canvas.”

The show’s second season introduced Avi Ram, a young body and airbrush paint artist based in Fort Lauderdale. Today he’s considered one of the world’s premier airbrush artists, amassing nearly 73,000 Instagram followers and traveling the globe to showcase his work at body painting festivals, including a recent event in Equatorial Guinea.

Born into a family of creatives—including his mother, a jewelry designer; his sister, a baker; and his cousins, visual artists—the Israeli native began making art at an early age, initially drawing in pencil. At 18, while crusing around the streets of Tel Aviv, Ram saw an airbrush artist selling his work and asked about his craft. Ram’s interest was piqued enough that he purchased equipment of his own to practice at home.

“I’m self-taught in airbrush painting, so it took me some time to understand how things work,” he says. “I began airbrushing daily, and I built up my confidence quickly.”

Even while serving his compulsory three years in the Israeli military, Ram made it a priority to work on his art. To avoid manual labor, a requirement of all Israeli military personnel, Ram volunteered to decorate the base, which included painting murals. After his time in the military, Ram heard about a job opportunity as an airbrush artist at a clothing store in Tel Aviv.

“My skills were terrible, but they were desperate and asked me to come in to shadow an artist they had on staff,” he says. Here, Ram began fine-tuning his skills and developing his own techniques while creating designs on clothes and teaching airbrush painting classes.

Upon moving to the States, Ram first settled in West Nyack, New York, where he opened an airbrush painting shop and continued to create designs on clothing. But South Florida’s warmer climate beckoned, prompting Ram to relocate to Fort Lauderdale in 2010. He opened an airbrush stand at the Swap Shop, making designs on clothing, teaching classes and offering repairs on airbrush equipment. As he was one of the few local artists doing this technique, Ram’s store and profile grew quickly. Clients began talking about “Avi from the Swap Shop,” Ram says. In the six years he was there, he even gained the moniker “Airbrush Hero.”

After competing on “Skin Wars” in 2015, where Ram was the runner-up, he began body painting celebrities. He painted Romijn for the opening credits for the third season of “Skin Wars” and Tyra Banks for a fashion editorial in Paper magazine. Later, he was commissioned to paint Cardi B for her appearance in City Girls’ “Twerk” music video, transforming the singer into a head-to-toe tiger. He also began working with actor and former California Gov. Arnold Schwarzenegger on his annual bodybuilding competition, the Arnold Classic, painting participants and even landing in second place at the event’s inaugural body painting competition in 2018. 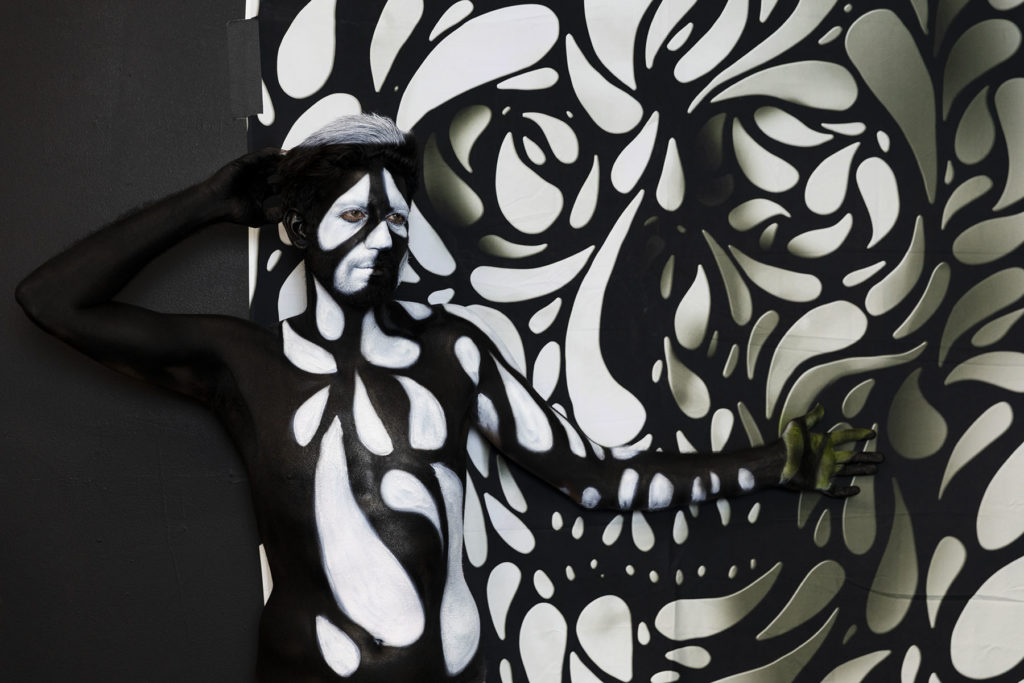 Ram’s camouflage body painting allows the painted subject or model (or in the case of this photograph, Ram) to disappear into his or her surroundings.

Ram’s most ambitious work—camouflage body paint—is perhaps his most visually impressive. He first created a camouflage effect during a “Skin Wars” challenge. Tasked with reinterpreting an otherwise ordinary backdrop of a seafood display by disguising a model in the scene, he ended up winning the challenge.

“I love the challenge and variation that offers a slight potential peek into the hidden model,” Ram says. Today, the 33-year-old’s work includes camouflaging models in nature, even creating a calendar a few years ago with photographs of Israel’s most well-known landmarks, seamlessly embedding a painted model in each of the shots. The simplest scenes can still take hours to complete, some even up to 18 hours. In the end, when the model disappears into the surroundings, Ram knows he’s completed a masterpiece.

Since his TV days, Ram has opened an art studio in Oakland Park, where he paints and teaches airbrush and body painting classes. Later this year, he plans to produce an experiential book of his work, featuring a mobile app that will allow readers to activate the work by using their phone cameras. Ultimately, he dreams of opening his own gallery. “I think I’m on the right path,” Ram says. “As long as I continue to work, I’m happy.”