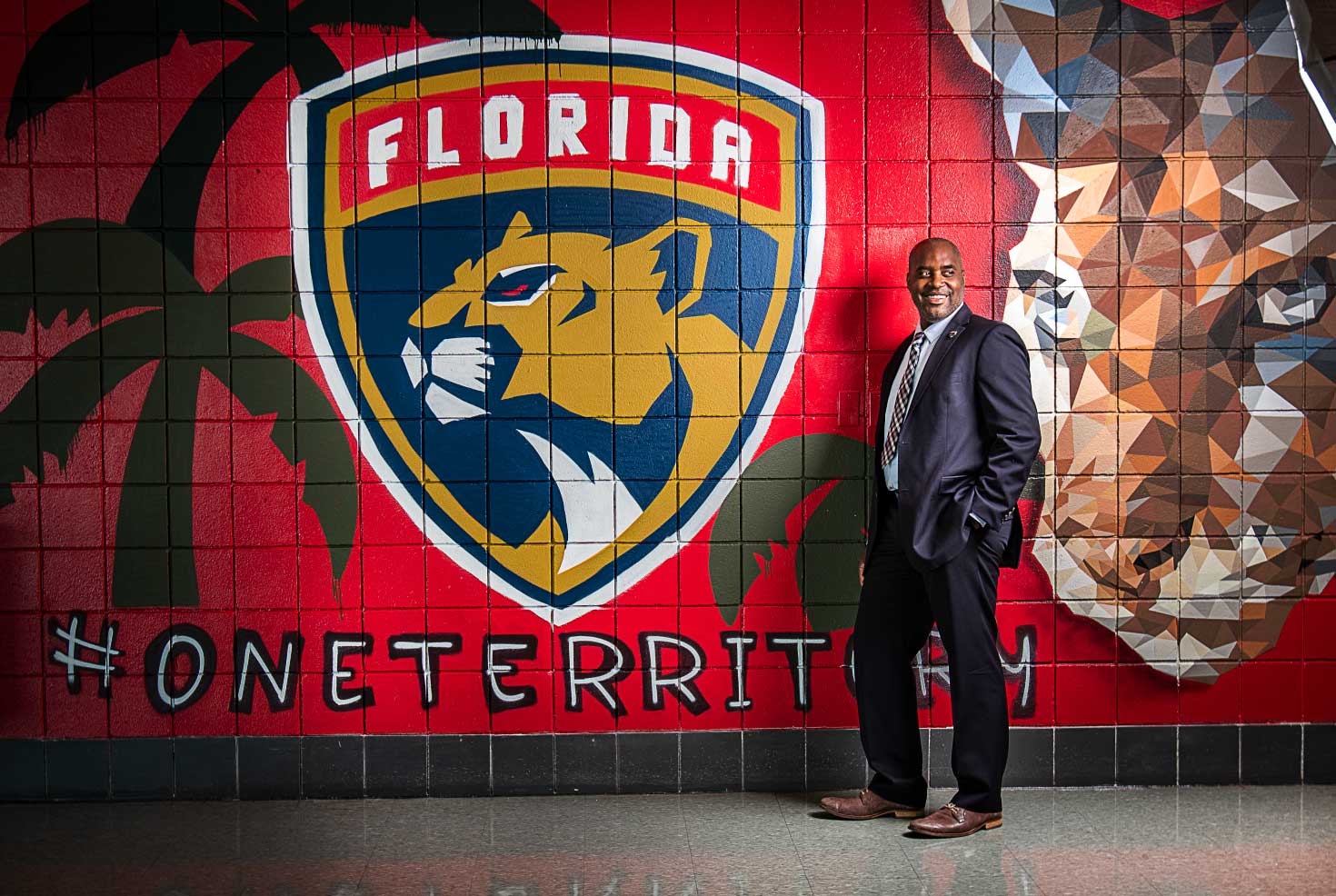 There isn’t a day that goes by that Brett Peterson doesn’t take a moment to peer down at his wrist for a little inspiration. Every time his Apple Watch turns and clicks open, he soaks in the message that pops up on the screen: “Remember when you wanted what you have right now.”

On the afternoon of November 17, 2020, Peterson’s wrist lit up with a series of different messages: a flurry of congratulatory texts and emails from family, friends and countless former colleagues after the news broke that he’d been hired by the Florida Panthers.

Spearheaded by the organization’s new general manager, Bill Zito, Peterson’s hire was significant both on a personal level and because of what it meant for diversity in the world of professional sports.

In the 100-plus years since the NHL’s inception, Peterson is the first Black executive to serve as an assistant general manager. Even though he understood the hefty weight of the moment, he was still taken aback by the resounding shock waves it sent through the sport.

“I didn’t think I was fully ready for how many people it would impact, but it was exciting to see,” Peterson says. “It’s always great when you can serve as some sort of motivation for others. It comes with a big responsibility, but it’s a big step forward.”

With Peterson’s hiring, the hope is that the world of hockey will continue to make strides in expanding its diversity initiatives, which include the Hockey Diversity Alliance launched last June. In 2020, The Institute for Diversity and Ethics in Sport reported that 57.5% of players in the NFL and 74.8% of players in the NBA were Black. By comparison, the percentage of players of color in the NHL, which was not featured in the report, typically hovers around 5%. Also, unlike the NFL and NBA, the NHL has only ever had one Black head coach and has never had a Black general manager.

That being said, Peterson says he has never felt like an outsider throughout his lifelong journey in the sport. He first took to the ice at age 3 when his mother used her position as a tutor to get him free lessons at a local college, and it was usually others who pointed out to him that there was something unique about his place in the game. “They’d be like, ‘Wow, you’re just so different and progressive,’” he says. “I never really thought about it much until I got older.”

Growing up in Northborough, Massachusetts, Peterson had a passion for pucks that eventually led him to Boston College, where he helped the Eagles win a national championship in 2001 as a standout freshman on defense. But it wasn’t just on-ice skills that he honed while at school. With his own unique background to draw from, he also discovered a knack for bridging gaps between groups.

“When I came to college, I lived with hockey players and football players,” he says. “That was kind of taboo back then, so I wanted to unify all of them. That’s one of the things I’m most proud of, bringing people together and not letting them live in traditional silos.”

Following college, Peterson played hockey professionally for five seasons, spending most of that time in the ECHL (formerly the East Coast Hockey League). Eventually, he hung up his skates and moved to the business side of the sport. Peterson became a certified NHL player agent in 2009 with the hockey agency Acme World Sports, which specialized in unearthing overlooked talent from around the world, such as goaltender and two-time Vezina Trophy winner Tim Thomas and defenseman and three-time Stanley Cup champion Brian Rafalski. 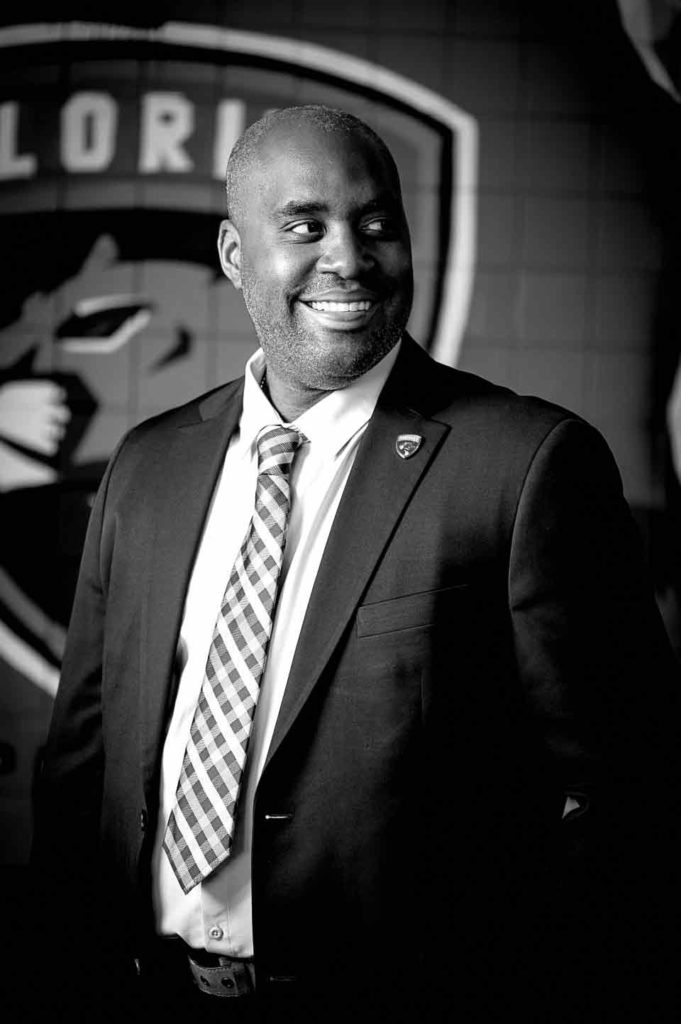 Peterson, who first took to the ice at age 3, now helps the Panthers target and cultivate up-and-coming hockey players within the college ranks.

During his tenure at Acme World Sports, which was acquired last June by the Los Angeles-based mega sports agency Wasserman, Peterson worked his way up to vice president in charge of hockey.

“When I was an agent, there were only two or three people of different races working as National Hockey League Players’ Association certified agents,” he says. “I’ve always been kind of an anomaly.”

While he found fulfillment during his time as an agent, Peterson admits his heart was yearning to return to the rink. So when Zito, who co-founded and oversaw Acme World Sports until 2013, called and offered him the opportunity to join the Panthers, he simply couldn’t pass it up.

“There are just some people you jump at an opportunity to learn from,” says Peterson, who previously worked with Zito during his career as a player and as an agent. “Bill’s one of those people. He’s extremely educated and passionate, and he knows what he’s doing. When he called, I knew I had to take the job.”

Settling into his new role with the Panthers, Peterson says he has his “fingerprints on a lot of different things,” but he spends most of his time drawing from his personal experience to help the team target and cultivate up-and-coming hockey players within the college ranks.

Just like he did roughly two decades ago in the dorms of Boston College, he also works to unify all the people working under Zito. “You’re trying to bring together a bunch of people who are in search of one common goal,” he says. “In our case with the Panthers, that goal is winning championships. To do that, we’ve got to have everyone here pulling the same rope.”

Outside of his work within the team’s hockey operations department, Peterson is also looking forward to getting involved in community outreach programs and hoping to help create a new diversity scholarship for local Boys & Girls Clubs.

“We have a responsibility to help in that capacity,” he says. “We also have a very big opportunity to change lives for people by doing very simple work. That’s something I can’t wait to get involved in. I think there’s a lot of great growth areas.”

In terms of overall growth of opportunities for people of color in hockey, Peterson hopes his new position with the Panthers has kicked open the door for future generations to follow in his footsteps.

“Hockey has been so good to me,” he says. “To change the trajectory of our sport, we just have to create the conversation. We need to allow other people who traditionally would not have thought they could travel down this road a chance to see they actually can do it.”