On a secluded stretch of Jamaica’s eastern shores, an eco-chic treehouse resort hovers above the rainforest. 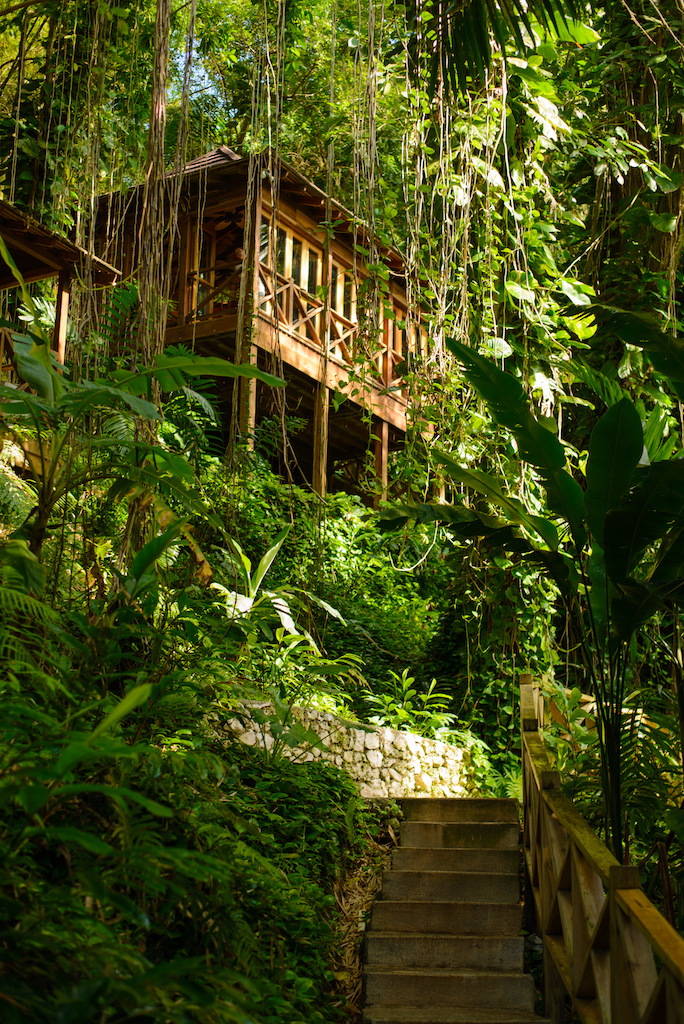 Jamaica’s main tourist destinations are often huddled in complexes dotting the coast. All-inclusives and sprawling resorts skirt the western end of the island in Negril or Ocho Rios, where attractions include the impressive Dunn’s River Falls and GoldenEye, where author Ian Fleming—the creator of James Bond—once resided. I remember vividly as a child when my family stayed in the capital, Kingston, during the annual carnival, when Jamaicans parade the streets in colorful costumes adorned with feathers and intricate beading. During these trips, we would take the winding and scenic roads, stopping along the way to snack on fresh-off-the-grill ears of corn and spicy jerk chicken.

The roads are like a rite of passage, but when we don’t have the luxury of time, a helicopter ride is a quicker way to arrive at the more remote locations, like Kanopi House, a six-acre retreat hugging the eastern edge of the island in Portland’s remote rainforest. It’s about a 30-minute helicopter ride from Kingston, followed by a 15-minute drive to the property. Once you arrive at the elegant eco-lodge, you’ll do a double take. These are not the views of waterfalls and white-sugar sandy shores typically plastered on postcards of Jamaica. Peak-roofed treehouses are connected by bamboo- and ginger lily-lined pathways, and open-air decks are sprinkled along the hillside retreat that overlooks the jade-hued Blue Lagoon, immortalized in the 1980 Brooke Shields film of the same name (shot on location here and in Fiji). 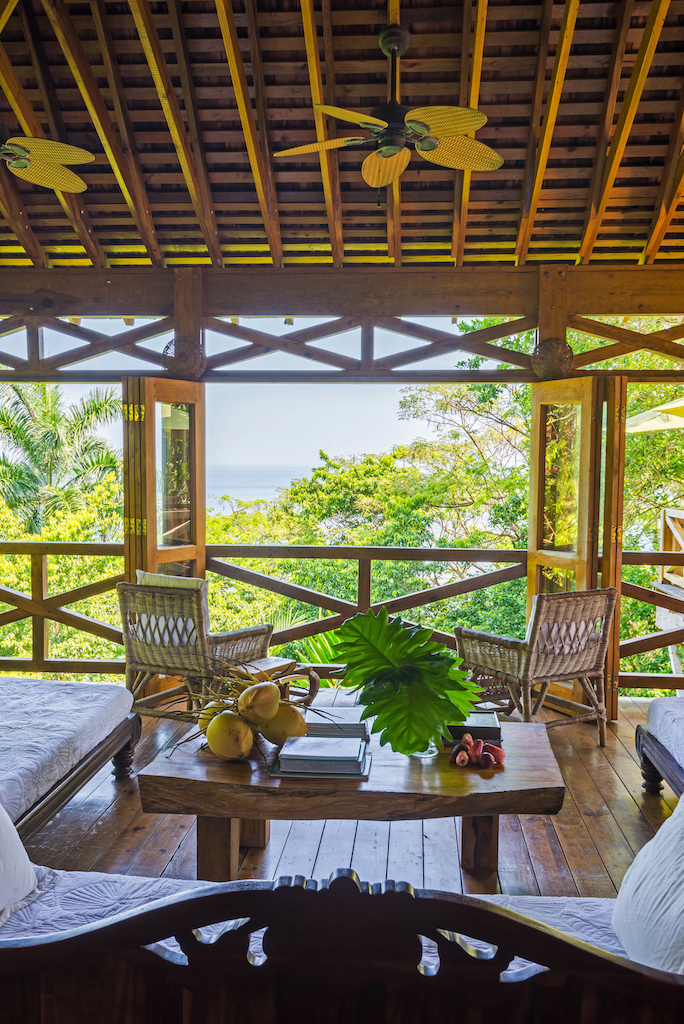 The same couple behind the private island resort Kamalame Cay in the Bahamas, Jamaican husband-and-wife duo Brian and Jennifer Hew designed and built the eight treehouses in the surrounding 100-foot, vine-filled banyan trees. Intended to blend into the scenery instead of becoming it, the couple didn’t destroy any trees while constructing the resort more than 15 years ago. Incorporating locally sourced, renewable materials, the treehouses are entirely sustainable—from the wood to the hand-crafted décor and furnishings made by Jamaican artisans (picture stunning, four-poster bedframes). The idea is to feel like you’re suspended in the treetops, with retractable wooden window shutters and balconies framing the surrounding rainforest on all sides.

Calling Kanopi an eco-lodge makes it sound far more rustic than it is. Rooms are equipped with air conditioners and ceiling fans, and there are luxuries like nightly turn-down service, custom-crafted toiletries inspired by scents found in the rainforest and kitchenettes stocked with local delicacies like Blue Mountain Coffee. If you want the most elevated perch on the hillside, book the Upper Deck, a secluded treehouse with 360-degree views ensuring you’ll be able to see both sunrise and sunset from your room. For something slightly more polished, the expansive Spanish Elm is more cottage than bungalow, with elegant touches like whitewashed walls, stately French doors, a wraparound veranda, and bath with an al fresco shower sitting a few steps outside your bedroom door. If you’re traveling as a group or with kids in tow—children older than 7 are welcome—Sweet Wood is your best bet. The resort’s only two-level treehouse features two downstairs bedrooms and an upstairs living room and entertaining area for everyone to gather over cocktails or board games—there’s WiFi in the communal Living Room, but the treehouses are TV-free and designed so you can disconnect. 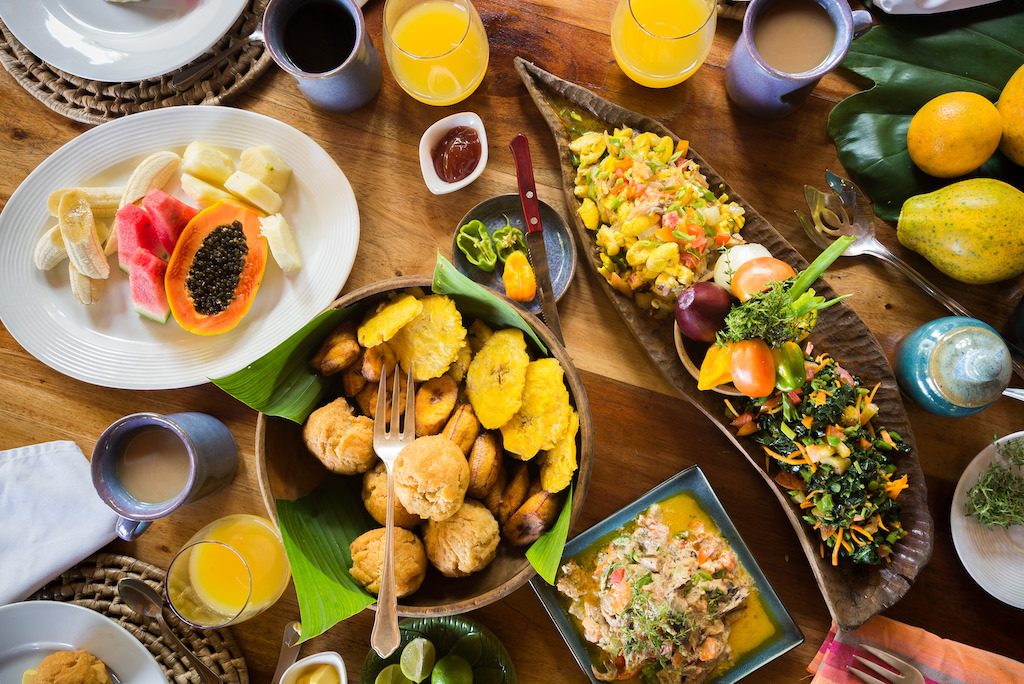 Throughout the day, drift in and out of the Living Room, the central treehouse that serves as a restaurant, bar and lounge space. Seasonal ingredients sourced from local farms and mountain gardens are woven into the daily menus featuring grilled and curried seafood and meat, breadfruit, sweet potato and callaloo, which are tailored to diners’ tastes—whether that be low-carb, vegan or heavy on the jerk and spice. Dinner takes on a romantic touch with candlelit, al fresco dining as the chefs prepare dishes like freshly caught snapper or lobster on the open grill. Linger and lounge post-meal on the white linen-swathed mahogany daybeds while sipping a refreshing rum cocktail or flute of crisp Champagne.

The lagoon views from the Living Room are pretty spectacular, but the secluded shoreline—once frequented by the likes of Ian Fleming and Golden Age actor Errol Flynn—is worth the five-minute Jeep ride to the coast. One of the only resorts with direct property access to the Blue Lagoon, you can swim or embark on a boat tour past waterfront villas to private Monkey Island, named after its former monkey colony, snorkeling along the shaded shoreline before feasting on a picnic prepped by the resort’s chefs; you’ll want an underwater camera or GoPro to snap shots of the vibrant marine life. At Reach Falls—another Hollywood backdrop that’s appeared in films like Tom Cruise’s Cocktail—swing from vines into the crystal-clear water, jump from the waterfall or take a dip in the natural, heart-shaped jacuzzi, which feels like you’re soaking in a hot tub with 50 jets. 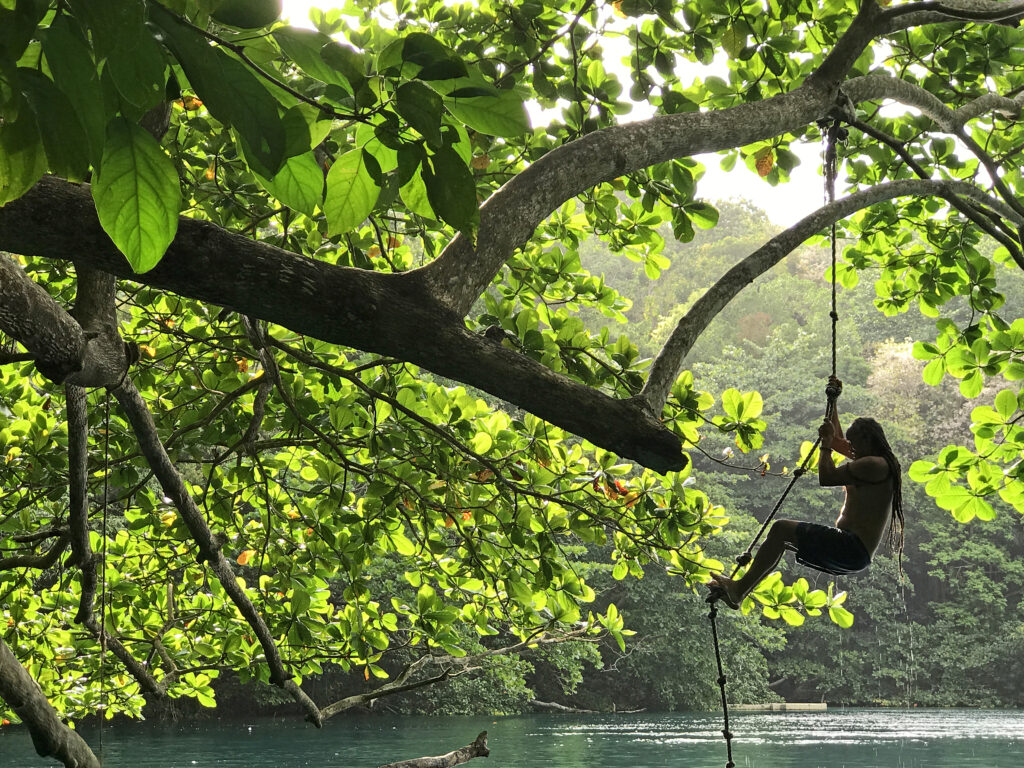 Another way to see the rainforests along the lush Rio Grande is on a 30-foot raft “steered” by a local captain (request Boxer—you won’t regret it), stopping along the way for lunch at beloved riverside eatery Miss Belinda’s. To round out the local experience, dine around the nearest town, Port Antonio, whose streets are lined with Georgian architecture, markets and wandering goats. The town is Jamaica’s banana port and is considered the gateway to the nature-rich Portland parish, but it’s also one of the more authentic and laid-back stretches of the island (despite its yacht-filled marina).

The beauty of staying somewhere like Kanopi House is that you’re close enough to the local culture in town,yet can easily set off on excursions through the Blue Mountains, where you can cycle the winding paths and tour coffee plantations grown on peaks soaring as high as 7,400 feet. But living in a rainforest is already enough of an escape in itself, and even if you don’t step off-site during your stay, you’ll still feel like you truly experienced a side of Jamaica that’s trapped in time—a rustic, real-life version of Robinson Crusoe combined with a taste of Old Hollywood, thanks to celebrities who helped put Port Antonio on the map in the 1940s.